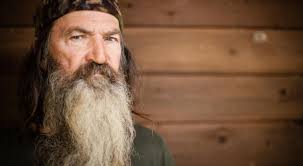 Robertson, the patriarch of the ubiquitous family made famous by the reality show, Duck Dynasty, found himself in the crosshairs of the GBLT crowd and those who kowtow to political correctness by saying in a magazine article that homosexuality is a sin. The network that airs the program, A&E, suspended Robertson and made a statement categorically disagreeing with him. Supposedly the network is considering dropping the show. END_OF_DOCUMENT_TOKEN_TO_BE_REPLACED