Question: How many times does it take before something becomes a cliché? Answer: The second time something is written. When it comes to writing, good writers recognize the curse of the cliché and swear a vow of originality. 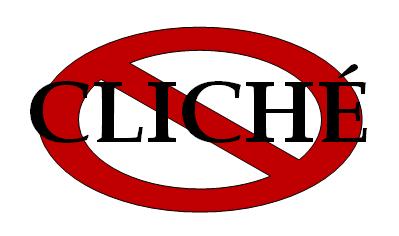 Being a former sports writer, I hate to “throw my own under the bus.” But sports writers too often try to “give 110 percent” and “come up empty” in the cliché department instead of “coming up big” with fresh ideas. They need to “relax and play within themselves.” You know, “let the story come to them.” They know they have to “focus on what they do best and not worry about what the other writers are doing.” “Take it one article at a time.” Most of them can “step up and take it to the next level” if they try, and sometimes it “comes down to who wants it more.” There is a “tremendous upside” when people “have their backs against the wall.” They’ll usually “come out swinging.”

Coaches are especially guilty of spouting clichés, but is it really their fault when sports reporters keep asking one cliché question after another?

And it goes way beyond the sports pages. Watch any local newscast, read your local newspaper and bump into any marketing copy. You know, if you’re looking for a car, you’re probably going to buy a car that was “built from the ground up” because it was designed “by car lovers for car lovers.” They “designed a great car so you don’t have to.” They “went the extra mile,” which is helpful because this way you can “do more with less.” And you know they nailed it because “30 million buyers can’t be wrong.”

Are you a motivated buyer yet? Yeah, me neither.

Another term for clichéd writing is LAZY writing. Really, it takes little effort to string together a bunch of phrases that a large majority of the population can spout from memory. However, apply these two simple tactics below and you can produce stronger copy. These apply to everything from 15-second radio spots to the next great American novel.

1. Be original. Wow, that sounds cliché, but the truth is people say it more than they actually embrace originality. Originality comes from simply refusing to repeat what somebody else has already done. For example, there is no shortage of similes and metaphors when it comes to offering readers a context or description of something. Look around, all the world is “like” something. See beyond the obvious to something that makes people notice what you’re writing. Like this sentence written by a friend of mine, Norman Jameson, regarding Basketball Legend Dean Smith’s death. “His death tipped the ink barrels of public sorrow, and tributes flowed across the pages of every newspaper and magazine.” Beautiful.

The application for writers is this: look at your subject from different perspectives and tell the “story” from someplace other than where everybody else “stands.” This works even for ad copy. Position a product from a fresh perspective using fresh words.

The quickest way to improve the quality of your writing is to kill the clichés in your writing. Swear a vow of originality, put some thought into it and become the person everybody else is repeating.